In the Head's Dusk

Saw Center, Ottawa, December 1, 2022 - March 4, 2023.
Curated by Amin Alsaden.
Press Release
​
Ali Eyal is known for works that merge the ordinary with the surreal. His artistic practice contemplates the elusive complexity, and at times nightmarish absurdity, of this world, in which our lives, stories and desires are inexorably entangled. Rooted in childhood memories, his polychromatic fabulations negotiate harrowing events that unfolded in his hometown of Baghdad, particularly following the devastating 2003 American-led invasion of Iraq. By underlining how the past informs the present, how joy can be born out of suffering, and how traumas of conflict haunt local and diasporic communities alike, Eyal addresses themes that resonate with a humanity confronting multiple existential crises today.

In his first solo exhibition in Canada, Eyal presents a constellation of new and existing works, including paintings, videos and sculptural installations, that shed light on how Iraq’s turmoil captures dynamics that overtly or surreptitiously shape our current global reality. On the twentieth anniversary of the invasion—one of the most flagrant examples of neo-colonialism in recent history—his work raises questions about the immense cost of the world’s voracious appetite for oil. The price includes an unspeakable toll in human lives, planetary environmental degradation, and dispossession, displacement and decimation of entire cultural traditions. Although based on personal experience, the artist’s work also elucidates how the occupation of Iraq points to ideological rivalries between capitalism and other worldviews, as well as imperialism’s endless wars, the repercussions of which go far beyond Southwest Asia (or the “Middle East”), often the casualty of incessant Western military adventures.

Through intense introspection, Eyal invokes the challenges of representing the unfathomable scale of the tragedies brought about by armed conflict, which obscure the more nuanced and tender aspects of the survivors’ lives. Poetry coexists with horror in his canvases, and an unsettling anxiety is evinced by the nonsensical logic, pervasive fragmentation and dense agglomerations found across his practice. The anatomical, an allegory for carnage, intermingles with the botanical, conjuring an alternative world of shadows, and the artist’s way of keeping difficult memories alive. Lodged deeply into the unconscious—in the head’s dusk, straddling that fertile zone between waking and sleep—his work is ultimately about perseverance, an insistence on bringing to public awareness narratives that have been concealed or suppressed. By giving agency to rebellious recollections, which refuse to be forgotten, Eyal deploys imagination as resistance.

Amin Alsaden
Autumn Solo Show, and. 2022
No Part Of This Book May Be Reproduced, In Any Way, By Photocopying, Recording, Or Otherwise, Except With The Prior Written Consent Of The Publisher, and 2019

Look what happened to this work when it traveled to Ottawa!
The Blue Ink Pocket, and. 2022
Video work
Duration: approx. 11 Min.
Language: Arabic and with english subtitles.
Installation view.
In the abounded garden, a match played by the national team and. 2022
Despite the irritation of the lacrimal gland, they won. Senseless tears, cold tears. Due to facing the heat of burning wood from around the farm. Your sky is frozen tear. I don’t know the dimensions.
The secret of my eyebrow and. 2022
Other details were released from my eyebrow showing me the memory of the future. I watched the clouds. A cloud arrived from whatsapp Oil and ink on the bark of my tree​
Berlin Drawing's Pad and. 2020
Photo by Ava Margueritte. 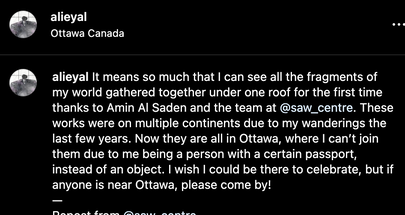